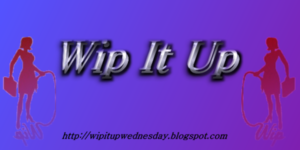 Welcome to my blog, and to another crop of  WIP It Up Wednesday snippets. This is the blog hop where authors share excerpts from their works in progress. Please feel free to comment – we love feedback, and it’s great to know if we’re on the right track.

My featured WIP this week is First Impressions, due for release on 22 September.

First Impressions can be deceptive.

Aidan Blake needs a plumber. Fast. His boiler is dead, his creaky old house crumbling around him. When his elderly neighbour recommends a local trader, George Mahon, Aidan jumps at the prospect of hot water and warm radiators.

But George, short for Georgina, is not exactly what he had in mind. He was expecting something else entirely. A man for one thing, not the gorgeous single mother he finds in his house at the end of a long day of work.

Just ask, it would seem. As they enter into a professional and personal agreement which soon blossoms into a sultry, kinky relationship, George continues to be surprised by Aidan’s kindness and generosity, not to mention his skill with a spanking paddle.

First impressions aside, the two begin to build something together. And while they peel back the layers to discover their hidden depths, the old house yields up the mysteries of its own secret past. They soon realise that at first glance, nothing is ever quite as it seems.

And here’s the excerpt, George’s first impression of a spanking.

He started slow, and soft, just flicking a series of quick spanks across her bottom and thighs. His palm was cupped slightly, and he kept his wrist loose so the slaps were light but enough to bring blood to the surface. Her buttocks were sensitised by his preparations and after a couple of minutes he flattened his hand and stepped up the pressure.

George stiffened, started to squirm. Her breathing hitched, then became faster. She was panting, and as the strength of the blows built she started to grunt with each spank.

Aidan slowed down. He was spanking her hard, though nowhere near as hard as he could if he wanted to leave her sore for a day or two, with marks to match. He didn’t—not this time. The strokes were spaced out. She had plenty of time to utter her safe word, or if not that then to gather herself between each one. To help her in that Aidan started to massage her buttocks after each stroke, smoothing the pain away or perhaps caressing it deep into her skin.

George let out a long, low moan, and lifted her bottom up higher. Aidan leaned to the side a little, enough to see her pussy, the lips red and plump and coated with her moisture. She was loving this, and so was he. His cock throbbed within his jeans and he longed to unfasten the denim and get some relief. This was not about him though. This was for her. His jeans stayed zipped.

“Sir, Sir…” Her voice was strained, thickened by desire.

Aidan widened his caress, drawing his fingers across her weeping pussy and spreading the moisture over her reddened arse cheeks. Her skin was really heated now, quivering under his hands.

She did it, lifting herself up on her toes to offer herself to him.

“Lovely, so pretty.” Aidan traced the outline of her pussy with his fingertips. “So hot. You want me to touch you?”

He slipped one finger into her warm wetness, sinking it deep inside her. “And this? You want me to finger-fuck you?”

Her response was a frantic whimper as she pressed her body harder against his hand as though she could bury him deeper within her. Aidan replied with a second finger, then a third. He twisted his hand to rub against her inner walls, scissoring his digits to increase the friction.

George was frantic, wriggling, gyrating her hips, her back arching as she pushed herself up on her toes. She was moments from orgasm when he stopped.

“Shh.” He caressed her reddened bottom, pressing hard now, then dropped a sharp slap across her left thigh.

George let out a shriek. He knew that last one had really hurt. Just a couple more like that, to leave a lasting impression…

He dropped three more hard spanks right onto her sit spots, then several more, less severe across her inflamed bottom. She was writhing on his lap, her response a mix of arousal and pain, the two now hopelessly confused. He slid his fingers down into the crevasse between her buttocks and drew them along the tight valley to circle her anus. She tensed at the intimate touch, but remained in position. He knew she would not protest if he explored more, at least not out loud. Her submission to him now was total, but he suspected she may not welcome the new experience. Not quite yet.

He continued on to trail his fingers the length of her weeping pussy. She was so wet, so hot, he felt like groaning himself. His cock was rock solid within his jeans, and really starting to hurt.

I feel your pain, baby.

He sank three fingers into her pussy, the walls convulsing around his hand as he did so. She was there, almost, just a fraction more… He twisted, thrust hard, once, then again, and she was gone. Her cunt contracted hard, gripping his fingers as her entire body tensed, then shook with the after-tingles of her orgasm. He continued to thrust his fingers in and out, though more slowly now, drawing out the moment. George moaned and panted, squeezing him hard with her inner muscles. At last she relaxed, and lay still.

Aidan withdrew his fingers and sought among the folds of her skirt for her bound wrists. He undid the knot with a couple of deft tugs then lifted her up. He turned her and settled her on his knee, her face buried in his shirt.

Neither spoke for several minutes. Aidan just held her, nuzzling her hair as she looped her now free hands around his neck and clung on tight.

He was the first to break the silence. “Now I think we should go to bed. Don’t you?”

George nodded, but made no move to let go of him. Aidan solved that matter by the simple expedient of sliding his arm under her knees and standing up with her in his arms. He headed for the door to the hall, then up the stairs.

I hope you enjoyed this snippet from First Impressions. If you like to read my brand of smut and want to keep up with news of my new releases, giveaways, promotions, etc and haven’t signed up for my newsletter yet, please consider doing that. No Spam. Ever. Check out the last few issues here

And finally, don’t forget to drop in on the rest of the WIPItUp authors sharing excerpts today. To find the list Click here

First Impressions
Over The Knee Anthology

In the Eyes of the Law
Her Noble Lords

The Magic of Living Exponentially

Stories to leave you spellbound.

Romance on a Budget